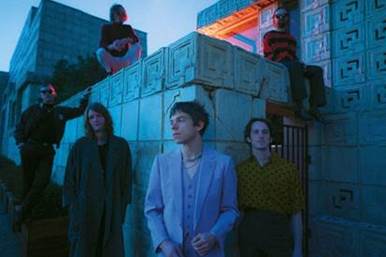 Cage The Elephant Social Cues Album has been all the rage since it has been released! The reviews from the press has been raving and it’s just getting started. Below are the latest reviews from some of the most respected press.

“Cage the Elephant’s songs unmistakably connect to rock’s past. Its music is studded with sonic and structural allusions, though it doesn’t linger on any particular style or era. And the songs are never simply period pieces or party tunes. The band doesn’t merely understand, and revel in, what a historical anomaly it is. It also has feelings, and shows them.”
New York Times
“If this is an old story, Social Cues is a dynamic, uncommon telling.”
Rolling Stone
“Their best album yet.”
Rolling Stone
“Arguably their best collection of songs.”
Associated Press
“Social Cues shows the group maturing musically without losing its grip on their ability to craft haunting, accessible tunes ready for the larger venues they have rightfully graduated to.”
American Songwriter
“The rock mainstay has lost none of their edge, expertly balancing gravity, dread, and the chaotic embrace of change against the scratchy guitars and unruly vocals that, even years later, remain indispensable to their signature sound.”
Consequence of Sound
“They are bringing their best selves to this latest album release.”
Uproxx