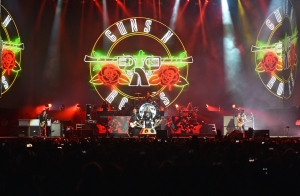 Why not?! This is a great time to make a new album. The “Not in This Lifetime Tour” isn’t even finished yet, and is already the fourth biggest tour of all time, closing in on $500 million. If you cannot understand the significance of this tour, this was the first time in nearly two decades that Rose and Slash have reconnected. The tour kicked off in 2016 in West Hollywood and snowballed from there. After only planning to play five shows total, they’ve trekked around the globe for more than two years and played to outstanding crowds and kicked ass while doing it. Both Rose and Slash are quite busy. Slash is about to release his fourth solo album Living The Dream in September, while the rumor mill continues to swirl about Axl Rose reuniting for a new AC/DC album. The “Not in This Lifetime Tour” runs through November 28th and will end in Johannesburg, South Africa.

Slash goes in-depth about the GNR reunion and what it’s like after all these years here.

You can see 4 very plausible reason for a new GNR album here.